In 1991 Pat Furr, Bonnie Huntington and Cliff Neil approached Chico Unified School District about creating a volunteer program to refurbish donated computers for school use. After several meetings and discussions the district decided to give it a try. Starting out in a spare room in Pat’s home, the program started on a very small scale to support education.

At this time teachers were heard to say, “I hope I retire before I have to learn how to use these (computers) in the classrooms”. Many principals didn’t know how to use email.

Pat had a background in teaching, business, public service as an elected school district trustee, and computers as she had attended CSU, Chico in the Master’s program in Computer Science.

After operating out of donated office space for several years, the program grew to the point of needing to lease space and even hire a technician. In August of 2001 CFC incorporated and has received the 501(c)(3) tax-exempt status from the IRS.

When schools had surplus computers after they received newer systems, we decided to assist low-income families and nonprofits as well by setting up systems too slow for classroom use but still great systems.

Computers for Classrooms was a beta tester for the Microsoft Community MAR (Microsoft Authorized Refurbisher) program. We are able to receive low cost licenses from Microsoft for operating systems and office suites. The level of offerings has changed over the years but usually is one level behind the current offerings from Microsoft.

CFC was one of the earliest programs to recognize the importance of data security and wiping hard drives. Our staff has invented some data wiping servers that not only wipes all data to United States Department of Defense (DOD) standards but reports any hard drives that have not been completely wiped. Any drives that are too small or don’t wipe completely are DeGaussed in a special machine that sends a high magnetic pulse through the drive that wipes all data but also destroys the drives for further use.  The drives are still usable for their commodity value although they are no longer useful as hard drives.

The IRS donates computers to our program with usable hard drives. Our drives are wiped in a secure locked room by one technician.

CFC has been placing 5,000 computer systems per year and has handed out tens of thousands of working, guaranteed systems since the program’s inception.

Presently, CFC occupies a 25,000 square foot facility with pallet racking, loading docks and our own 26 foot box van. Since reuse is 25 times better for the environment than just recycling, CFC is an important link in fulfilling a great need for technology to those who cannot afford to buy new systems. Work with us to close the digital divide.

Donation door opens at 9AM 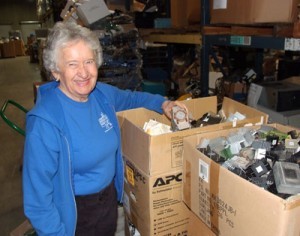